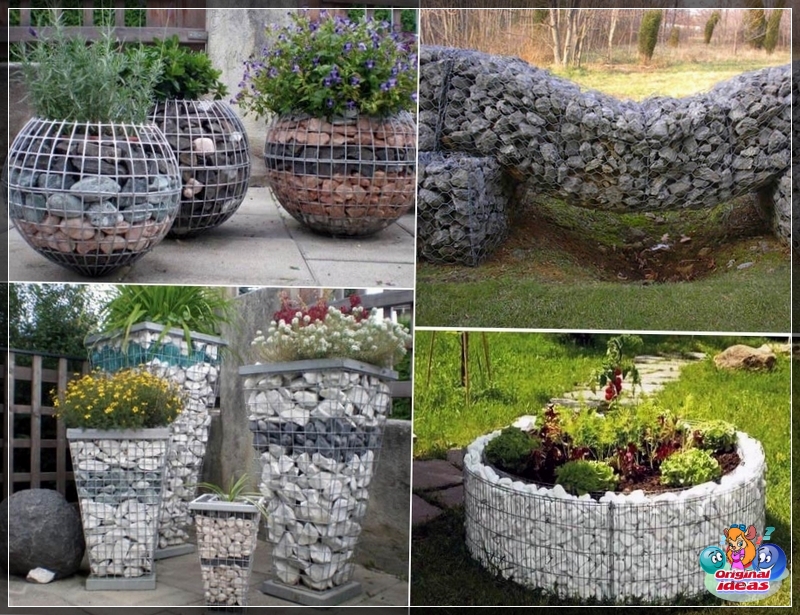 Gabions in landscape design, photos of which can be found in Figure 1, are a rather interesting design idea. It is worth noting that initially such structures were used exclusively in military affairs. However, creative people will always find unusual uses for the simplest things. So gabions became part of the decoration of the local area. Of course, this is far from the only idea that came to landscape design from the army, but it is precisely such designs that are gaining more and more popularity in our time.

What forms do not gabions acquire in garden plots and adjoining territories?. It is worth noting that many designers have recently been using structures of this type as fences. This is an interesting and inexpensive option, but it requires serious physical costs if you make the structure yourself.

Gabion is just a basket holding the filler

By themselves, the gabions in

landscape design, photos of which in Figure 1, are simple metal mesh boxes that are filled with stones and other suitable elements. Translated from french basket. The way it is, because the gabion is just a basket holding the filler. 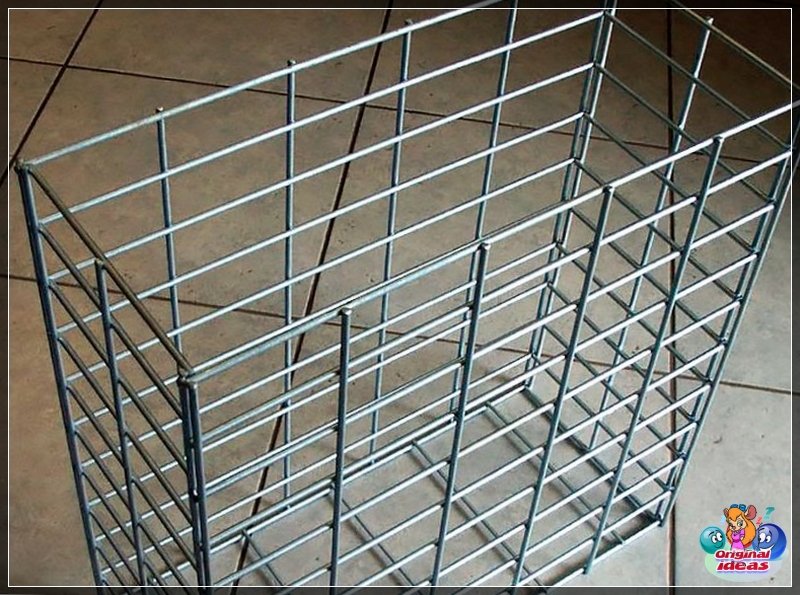 High fences are made from gabions

Initially, such structures were used during the war to provide all-round protection. High fences were made from gabions, which protected the military. In addition, they could serve as retaining walls, which were used when digging trenches. Nowadays, gabions are also often used to strengthen walls. For example, when the garden area is sloping, they will come in handy. 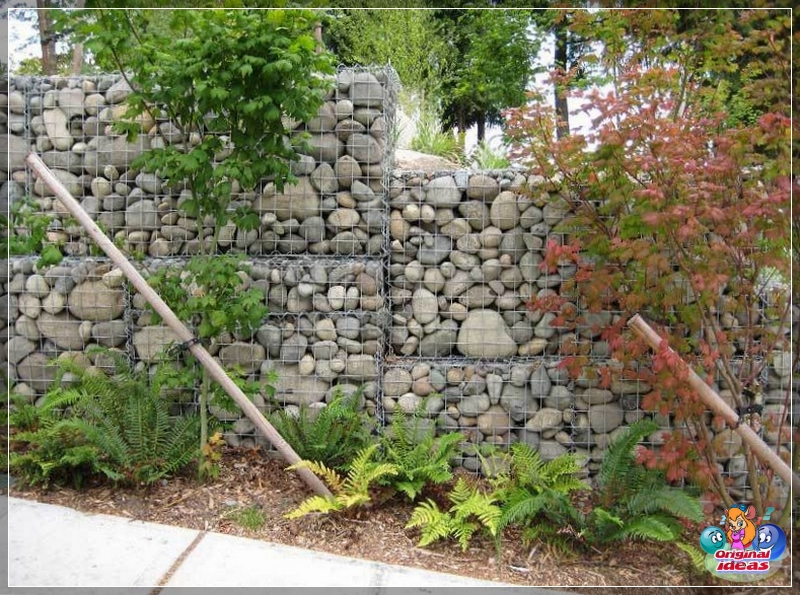 Gabions are used to strengthen walls

Gabions are widely used not only in landscape design, but also in road construction. Structures of this type protect against landslides and erosion of routes.

It is not difficult to make such a structure, but you will have to work hard. To weave a mesh for gabions of the desired shape, you will need certain tools and good physical strength. Depending on the type of gabion, it can be created in one piece or assembled from several parts. The latter option is most often used when working with complex figures, for example, when making a gabion in the form of an animal. Simple tools are no longer enough to connect several separate structures. Here you cannot do without a welding machine. 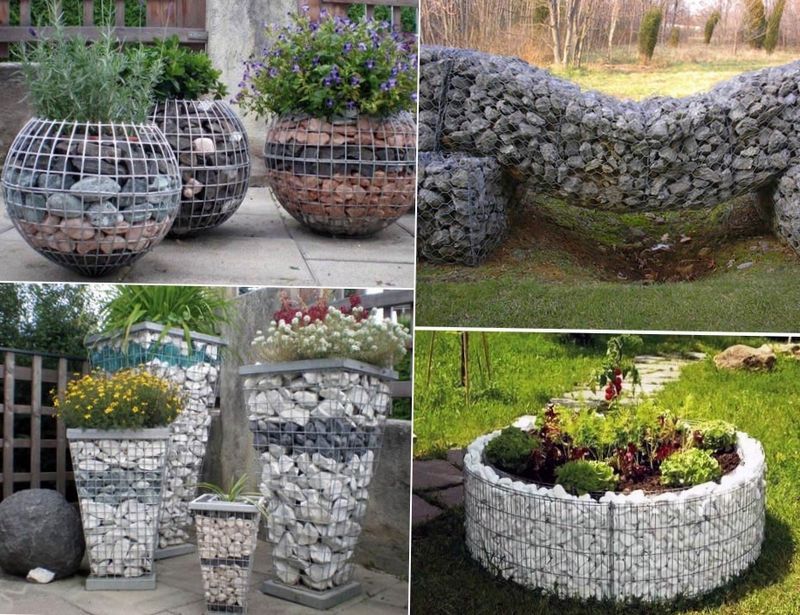 When choosing a material for such a structure, it is necessary to pay special attention to the resistance of the mesh to corrosion. In some cases, plastic is not used to make a gabion. These options work well for garden figurines. However, if the structure must perform a protective function, for example, to strengthen the wall, it is worth choosing the material that is stronger. 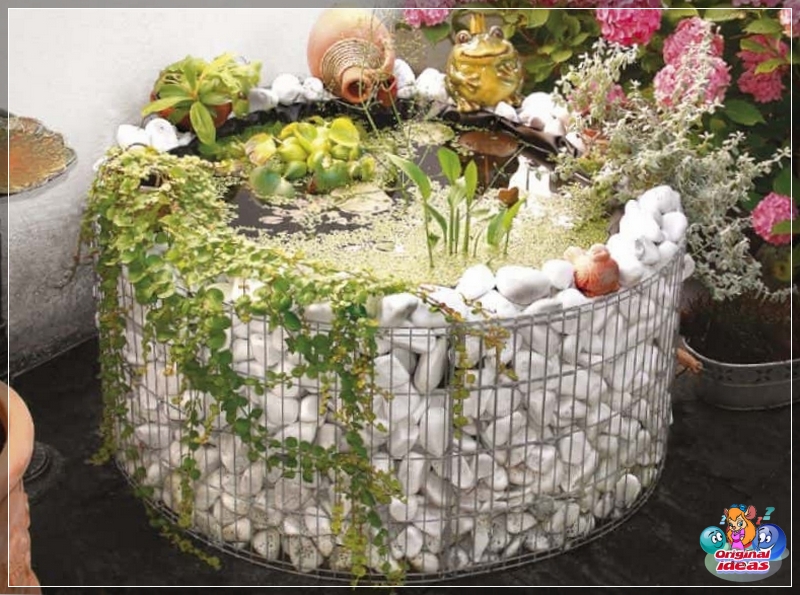 The shape of the gabion can be absolutely any

The shape of the gabion can be absolutely any. There are products of rectangular, square, round and triangular shapes. Flower beds and just garden figures are often made from gabions. With the right approach, the product will not only decorate the local area, but will also last a very long time. Moreover, it is very easy to care for gabions. 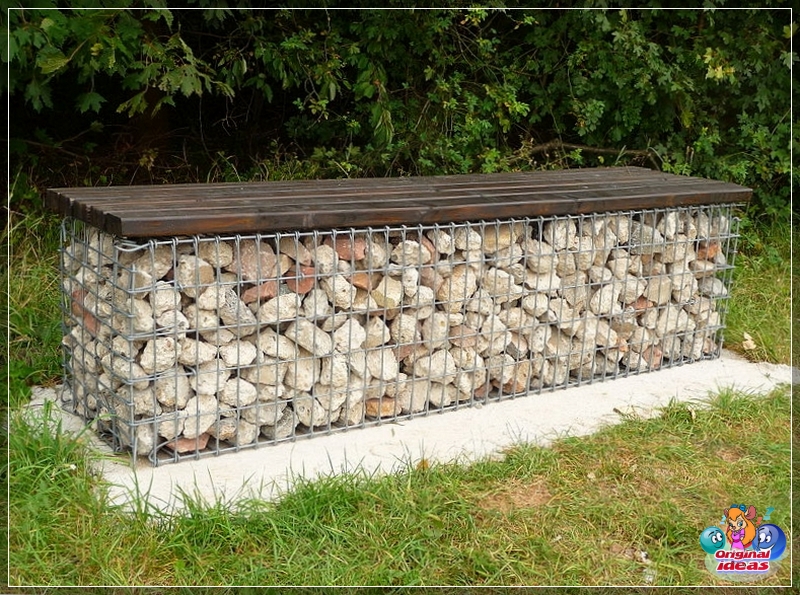 It is very easy to care for gabions

When working with such structures, certain requirements must be observed. For example, rectangular structures should not be more than 6 m in length and 2 m in width. Their height should not exceed 1 m. 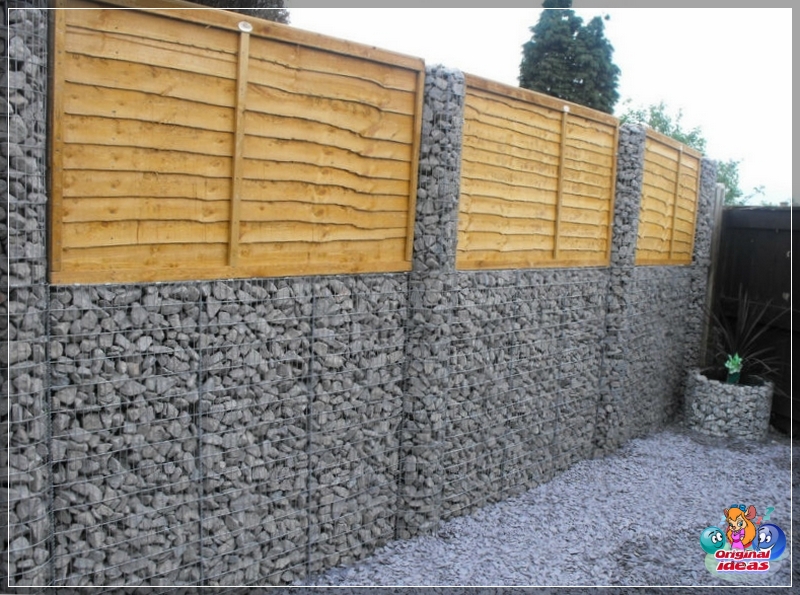 When working with gabions, certain requirements must be observed

As for cylindrical structures, their permissible length is 4 m. In this case, the structure will be strong enough, and the mesh will withstand the required amount of filler.

Diagram of a rectangular gabion

Long, but low structures that lay on the ground can be made of any length and width, but their height should not be more than 30 cm.

Particular attention should be paid to the filler, since the lighter its weight is, the higher the gabion can be laid out. Most often, ordinary pebbles or wild pebbles are used for filling

stone. Such designs give the site a special chic. 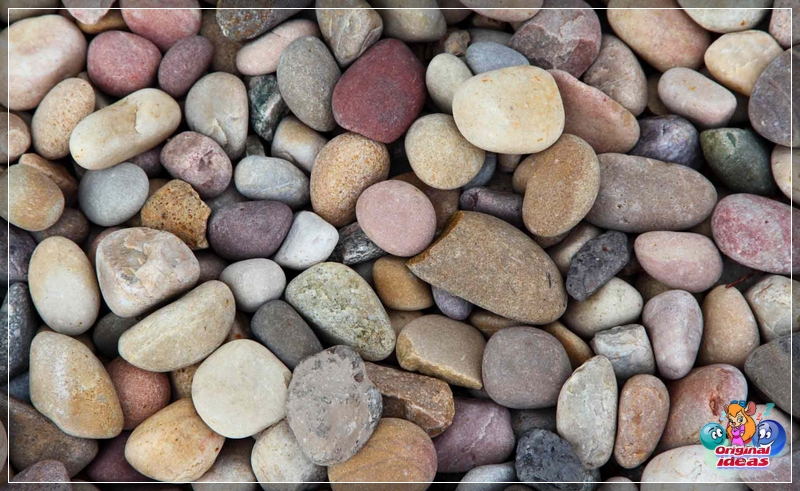 Most often, ordinary pebbles are used to fill the gabion

Often, various tricks are used to reduce the weight of a structure. For example, you can lay out the inner part with logs, and the outer layer can be made of pebbles. Some people use glass bottles, decorative colored stones and other materials as fillers. 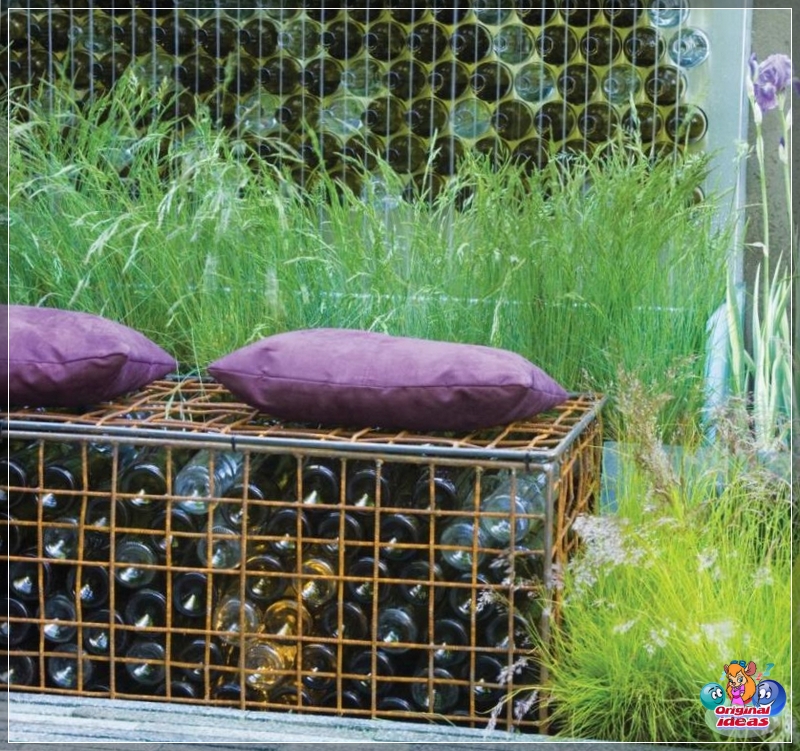 Some people use glass bottles as filler

Where to place gabions?

Of course, everyone dreams of making their yard look excellent and impressive. To do this, many owners of private houses use various techniques, the most popular of which are beautiful lighting, unusual flower beds and even fountains. But all these are rather hackneyed topics, but gabions in landscape design, photos of which can be found in Figure 1, are really original. However, when working with them, you need to take into account all the nuances of these structures. If positioned incorrectly, the yard will look like a battlefield, not a place to rest.

Gabions can look pretty rough, so they should always be diluted with bright

flowers, lots of greenery and variegated flower beds. For greater effect, it is not at all necessary to use a plain filler. Backlit gabions look very good. It is quite easy to make them, since for this it is enough to stretch the LED strip under the frame. 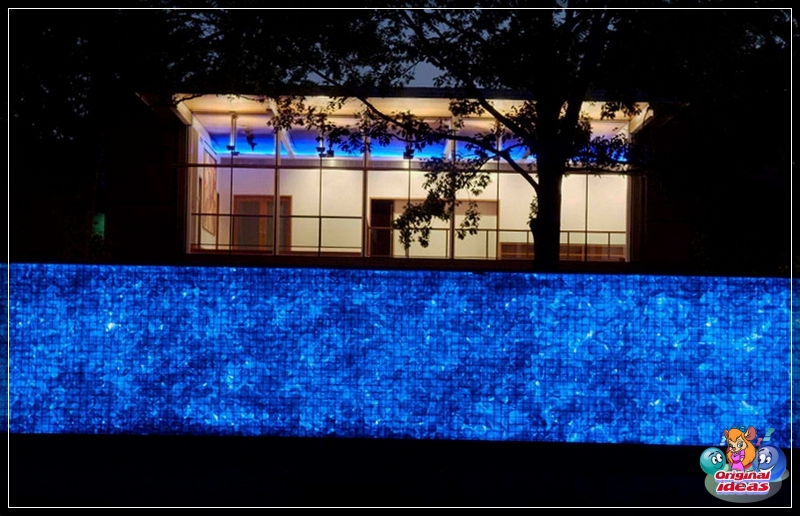 Gabions can be an excellent solution for an unusual fence or partitions inside the yard. Moreover, reinforcement with gabions is often used if the site is on a slope. In addition, the gabion can protect the coastal part of the territory, if any.

Retaining wall made of gabion structures

There can be a lot of applications and places for the location of a structure of this type. In addition to standard rectangular fences made of gabions and walls, animal figurines or ordinary geometric shapes that perform simple decorative functions are very popular. You can even decorate the pool with gabion. This design will make an excellent fence for an artificial reservoir. 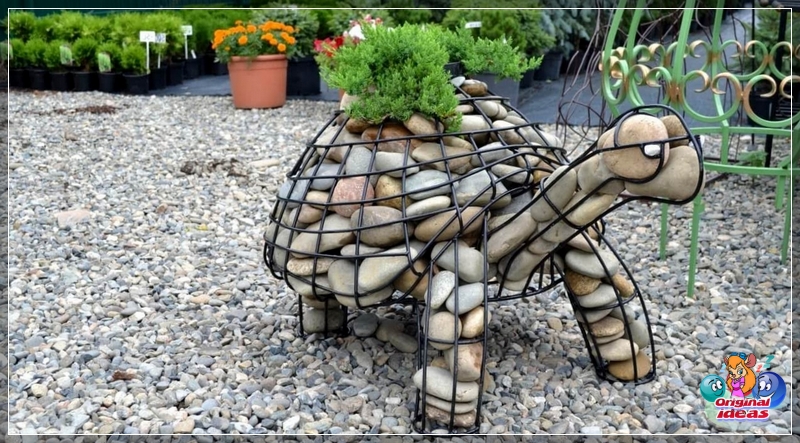 Those who like to relax in nature cannot do without a corner in the garden with a table and chairs. Often, standard plastic furniture is used for this. It is lightweight and does not deteriorate when exposed to natural factors. However, plastic can not be called convenient in any way. Other materials can be used in the yard, but in this case, every time it rains, the table and chairs will have to be hidden, and this is not always possible. In such a situation, a gabion would be an excellent solution. 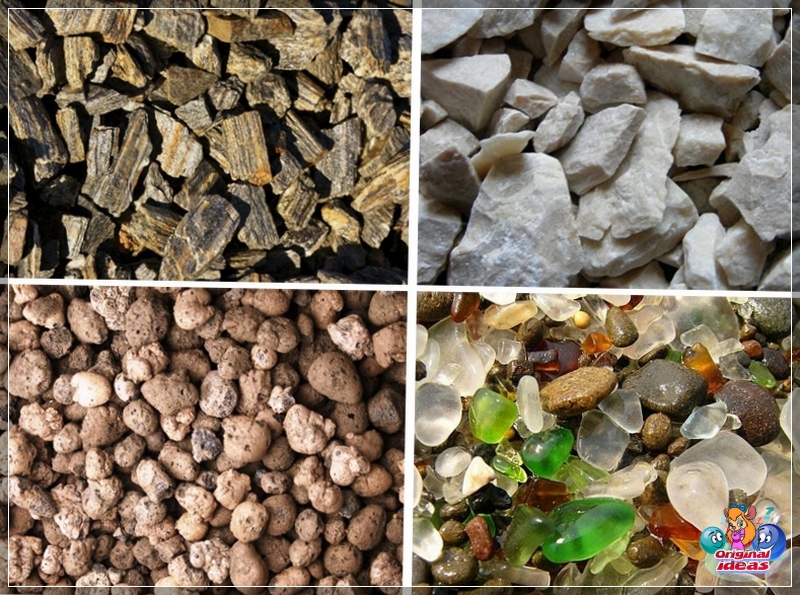 Types of fillers for gabions

It is enough just to make a solid structure of the desired shape and fill it with a beautiful stone. Several squares can be placed around the table to serve as chairs. In this case, you need to remember that the furniture will be used often and must withstand sufficient loads, for example, the weight of a person. For this reason, it is worth fixing all fasteners with a welding machine. Welded gabions last much longer and allow for thinner designs. 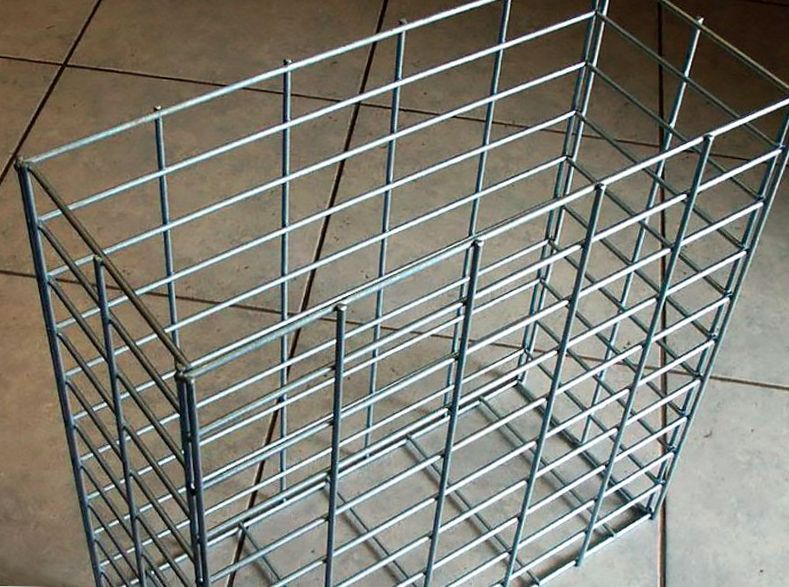 Novice landscape designers can be advised to start with a small fence. For example, you can make a mesh for the simplest rectangular gabion and fill it with pebbles. From this you can make a fence for a flower bed, which will give the site a more well-groomed look. 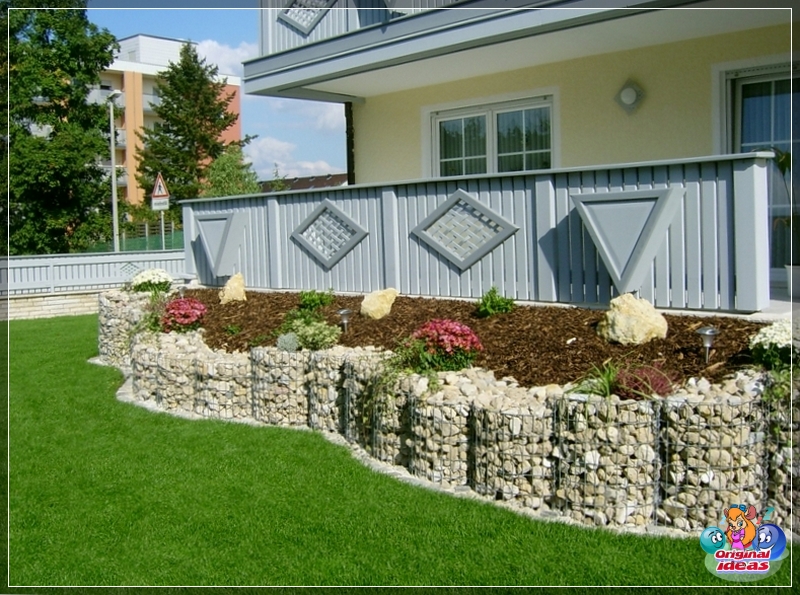 It is worth noting that gabions in landscape design are often used for rather unusual solutions to complex problems. For example, if the owner of a private house decides to put a gazebo on his site, he will have to make sure that it is not flooded during the rain, since excess moisture can simply spoil the wood. Gabion can be the design that will quickly solve this problem. The thing is that a large filler makes the structure rather porous, so water will not accumulate in it. This will reduce the negative impact on the frame of the gazebo and prevent soil erosion. 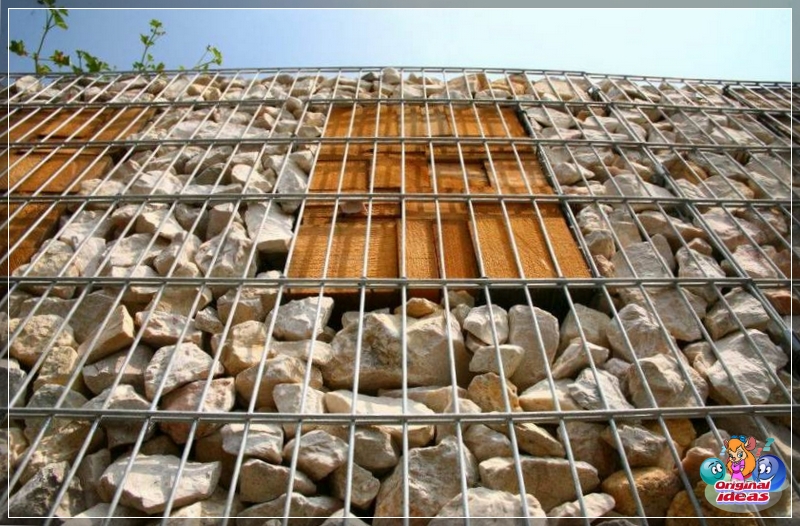 Gabion can be easily made by hand

How to make a gabion with your own hands?

The design is not complicated, so you can make it yourself. First you need to think about the shape of the gabion, and then start buying materials. The purpose of the structure is also important. If it is just a decorative figurine decorating a garden, you will need the simplest tools to create it. To create retaining walls from gabions, garden furniture and a fence, you cannot do without a welding machine.

The easiest option for structures of the correct shape would be to purchase a ready-made chain-link mesh, which is then cut and sewn in the right directions. Often the material is sold already coated with a special protective agent, so it can withstand even difficult weather conditions. 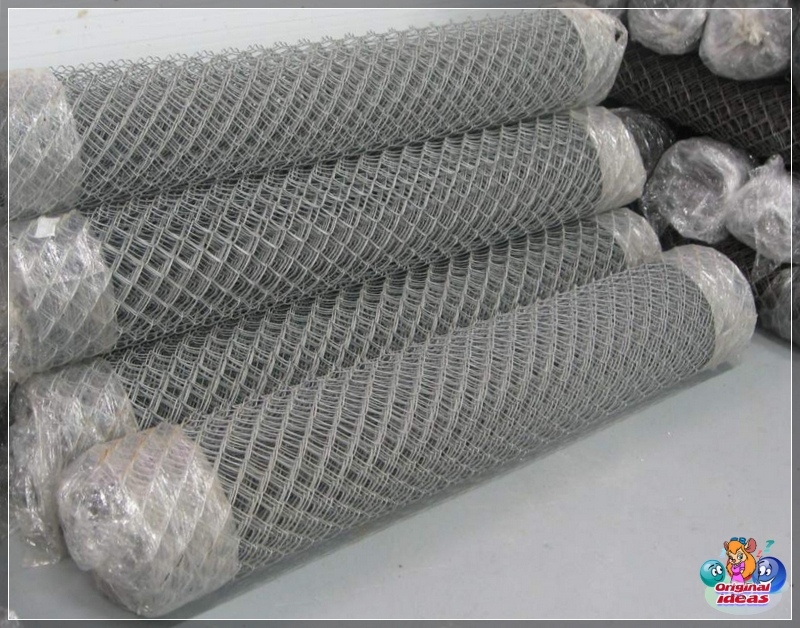 The gabion is installed on a support, which can serve as ordinary metal pegs. They are needed mainly at the stage of filling the grid so that the basket does not leave the intended place.

Experts recommend that beginners use a mesh made using spot welding technology. Such gabions, the photo of which is in Figure 2, turn out to be more accurate, and it is much easier to work on their creation.